As with each volume, several sections allow you to rediscover the game from every angle:

-Complete solutions of both quests with maps, shortcuts, details of traps and secrets.

Each section is full of details and anecdotes, accompanied by numerous illustrations.

ZELDA - The video game legend as you've never seen it before!

The presentations chronicle the storylines, game systems, complete bestiaries with all sorts of creature information, full inventories of both versions, cartoon and children's story adaptations, and merchandise from the first installment of Nintendo's most famous saga.

Does this volume include a solution?

- Yes, detailed solutions to both quests.

Is this volume independent of the other Fan Books?

Presentations of The Legend Of Zelda

This presentation includes a review of the storyline, the game system, and the various editions available in the world with box variants. 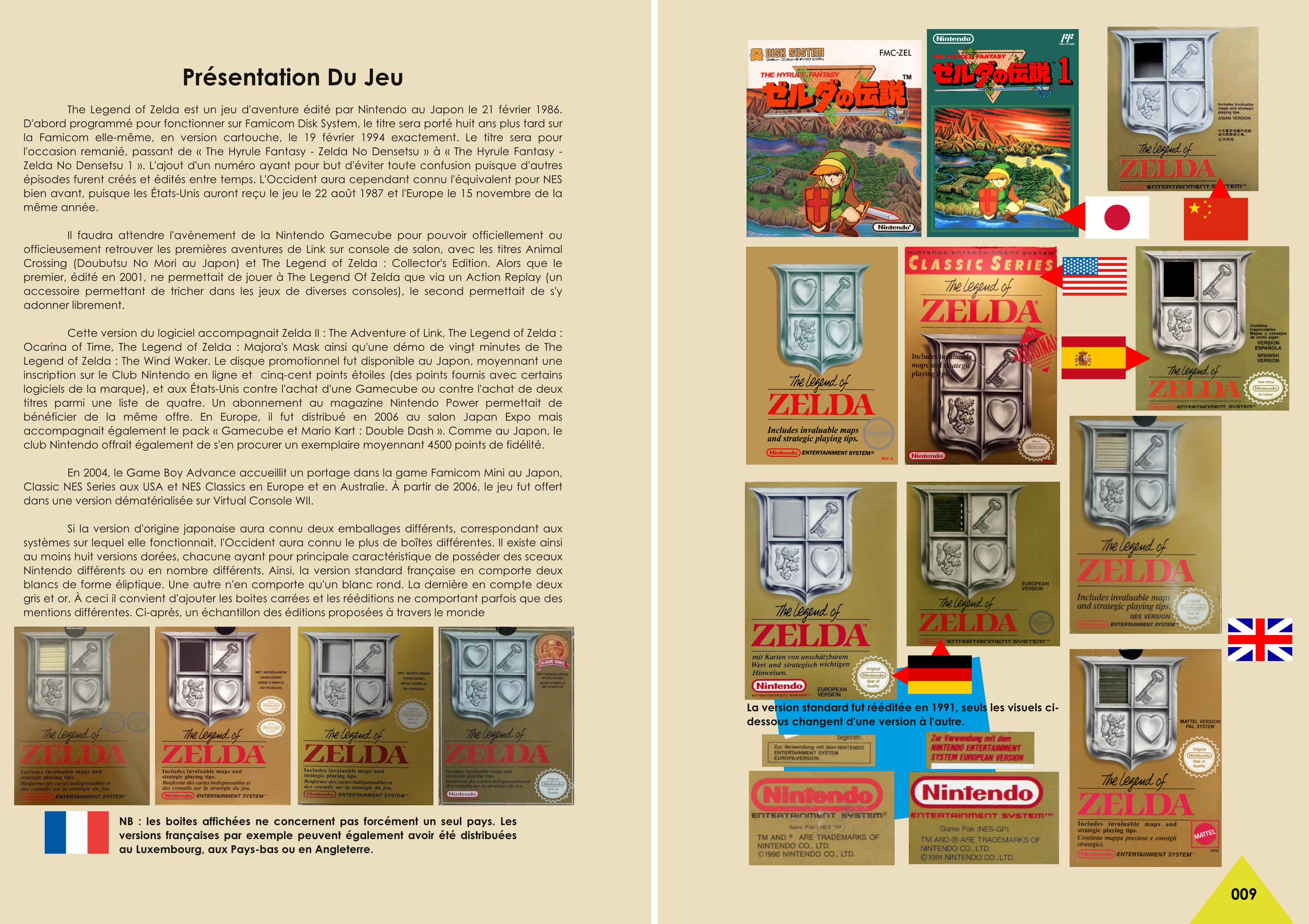 Inventory of The Legend Of Zelda

The inventory describes all the items of the game with their strengths and weaknesses, their value and the places where to find them. Many anecdotes come back on the translation or the origin of their name, the mistakes in the notices or the differences between their illustration and their rendering in sprites. 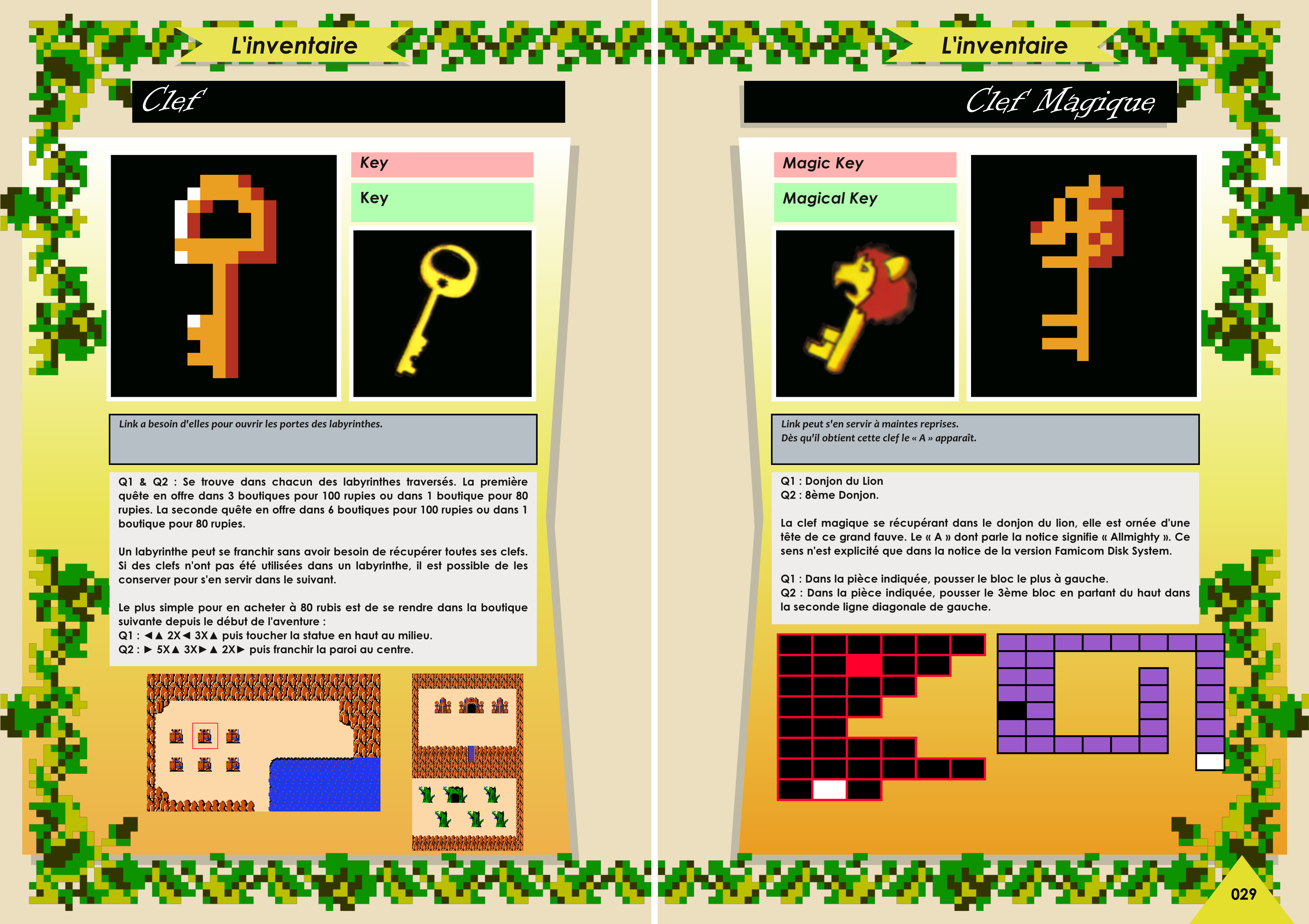 Bestiary of The Legend Of Zelda

Bestiary of the NES/Famicom version: 36 pages.

The bestiary describes all the creatures of the game with their strengths and weaknesses, their specificity and the places where to find them. Many anecdotes come back on the translation or the origin of their name, the mistakes in the notices or the differences between their illustration and their sprite rendering. 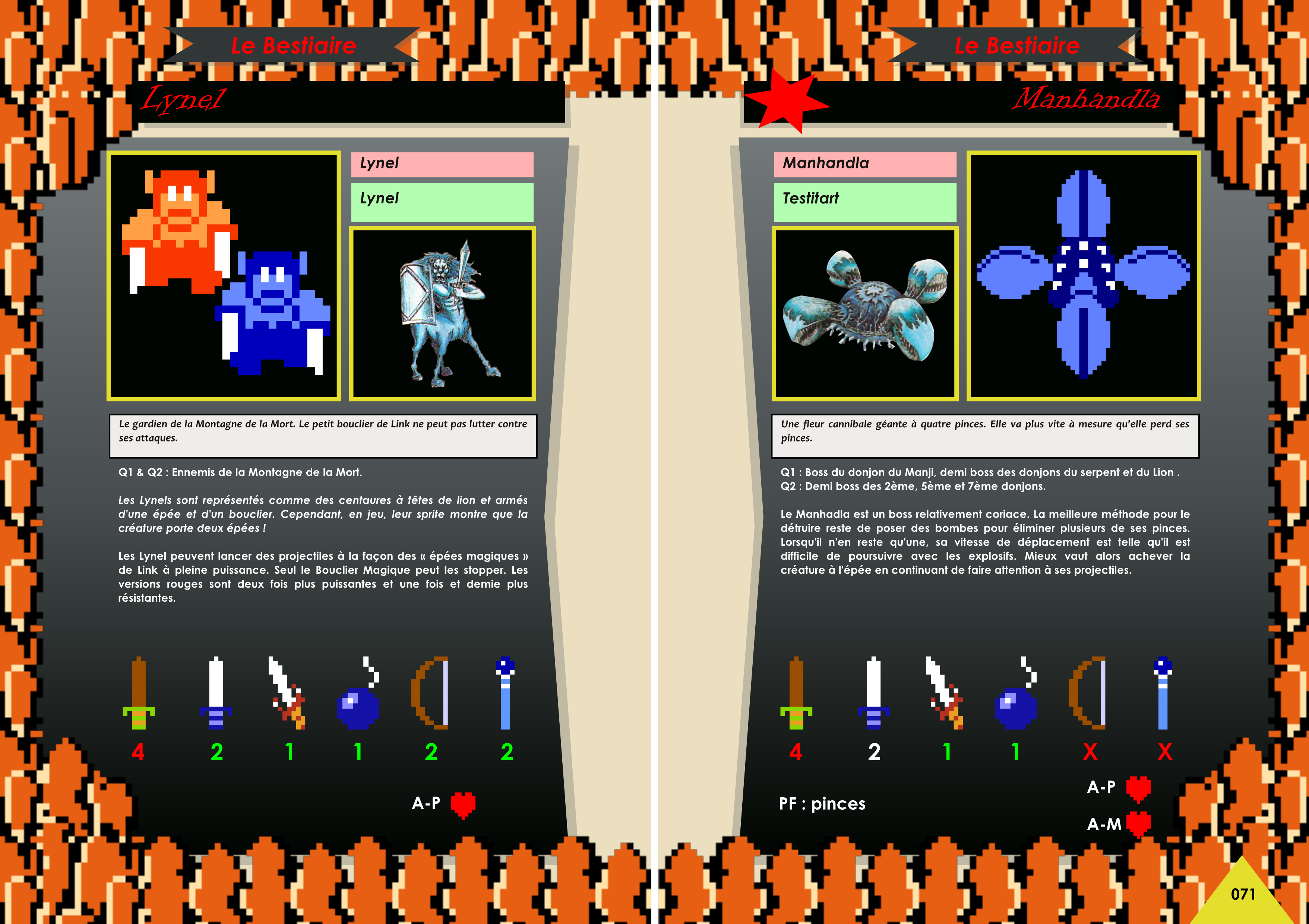 Solutions of the two quests of The Legend Of Zelda

Solutions of both quests: 68 pages.

The detailed solutions offer maps of the outside world and the dungeons with all the necessary indications to unearth 100% of the secrets and hidden hearts. Each dungeon is meticulously annotated and has a normal or quick path, depending on whether you want to finish the game quickly or go through it all.

Each area of the outside world and each dungeon has a reminder of the creatures that roam the area.

There are many tips on how to get through the puzzles, obstacles and bosses without any trouble. 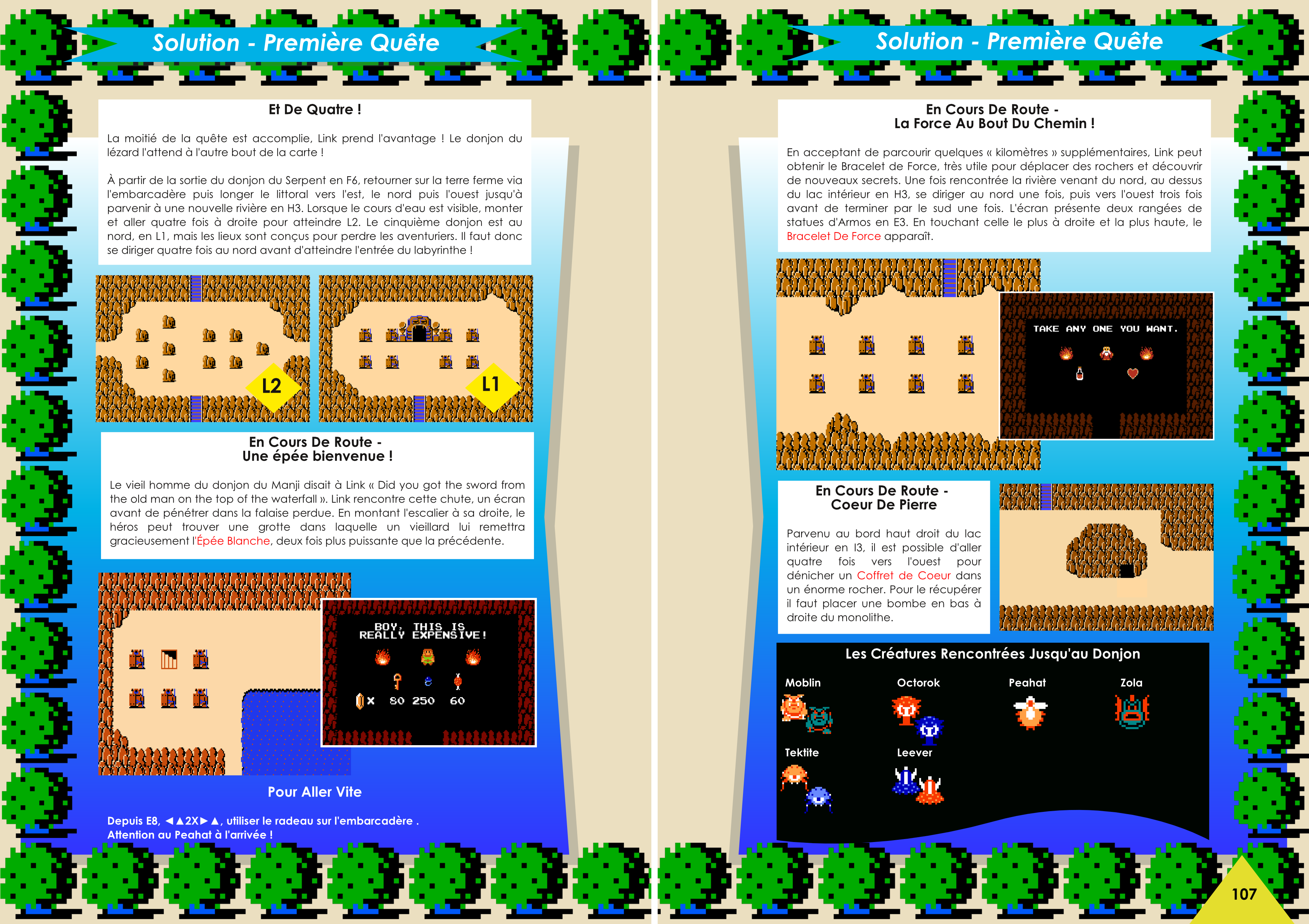 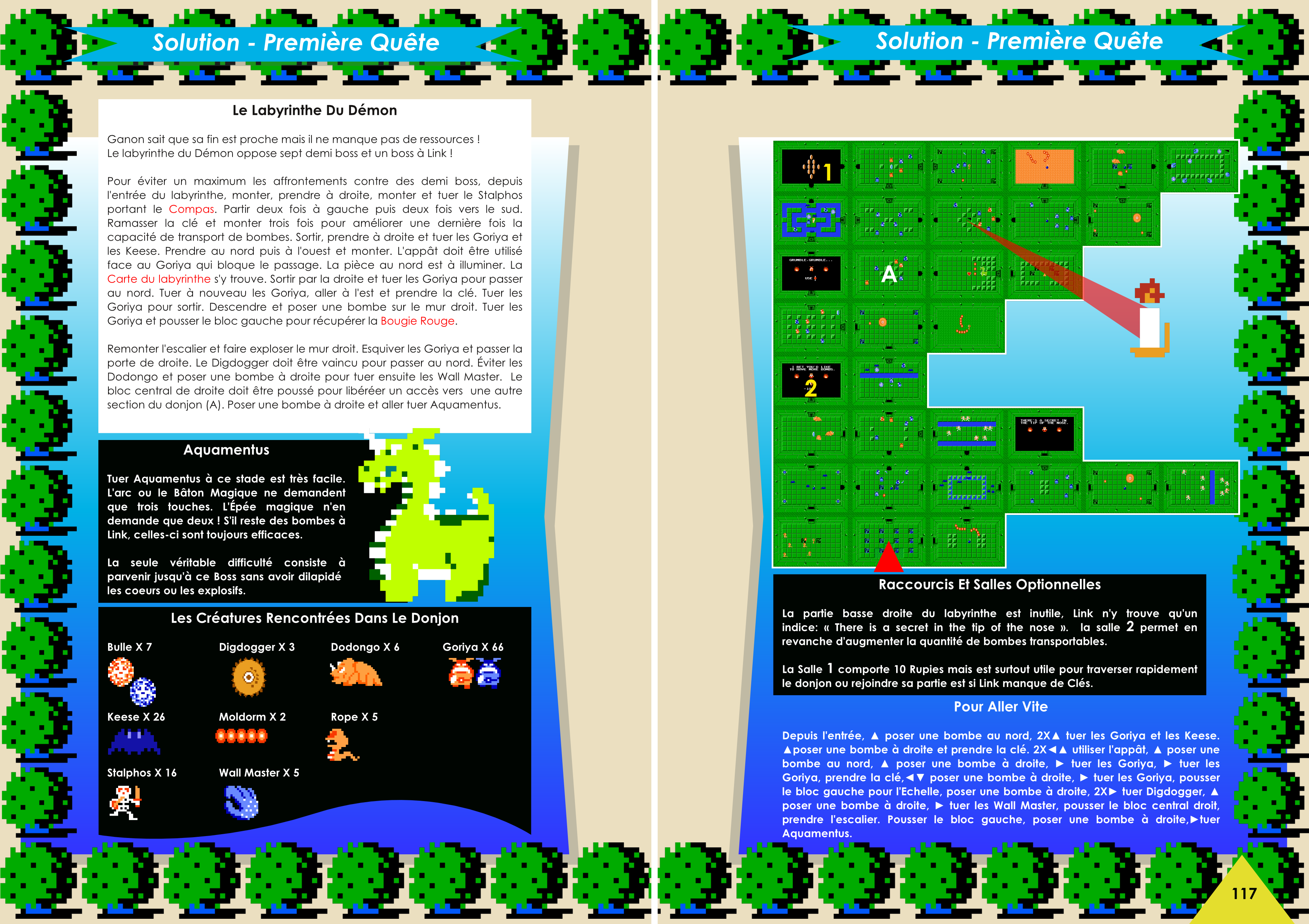 BS The Legend Of Zelda

Presentation of BS The legend Of Zelda: 22 pages.

The remake of The Legend Of Zelda, published via the Satellaview of the Super Nintendo is discussed in detail and goes back over the concept of the game, its dungeons, its inventory, and its bestiary. 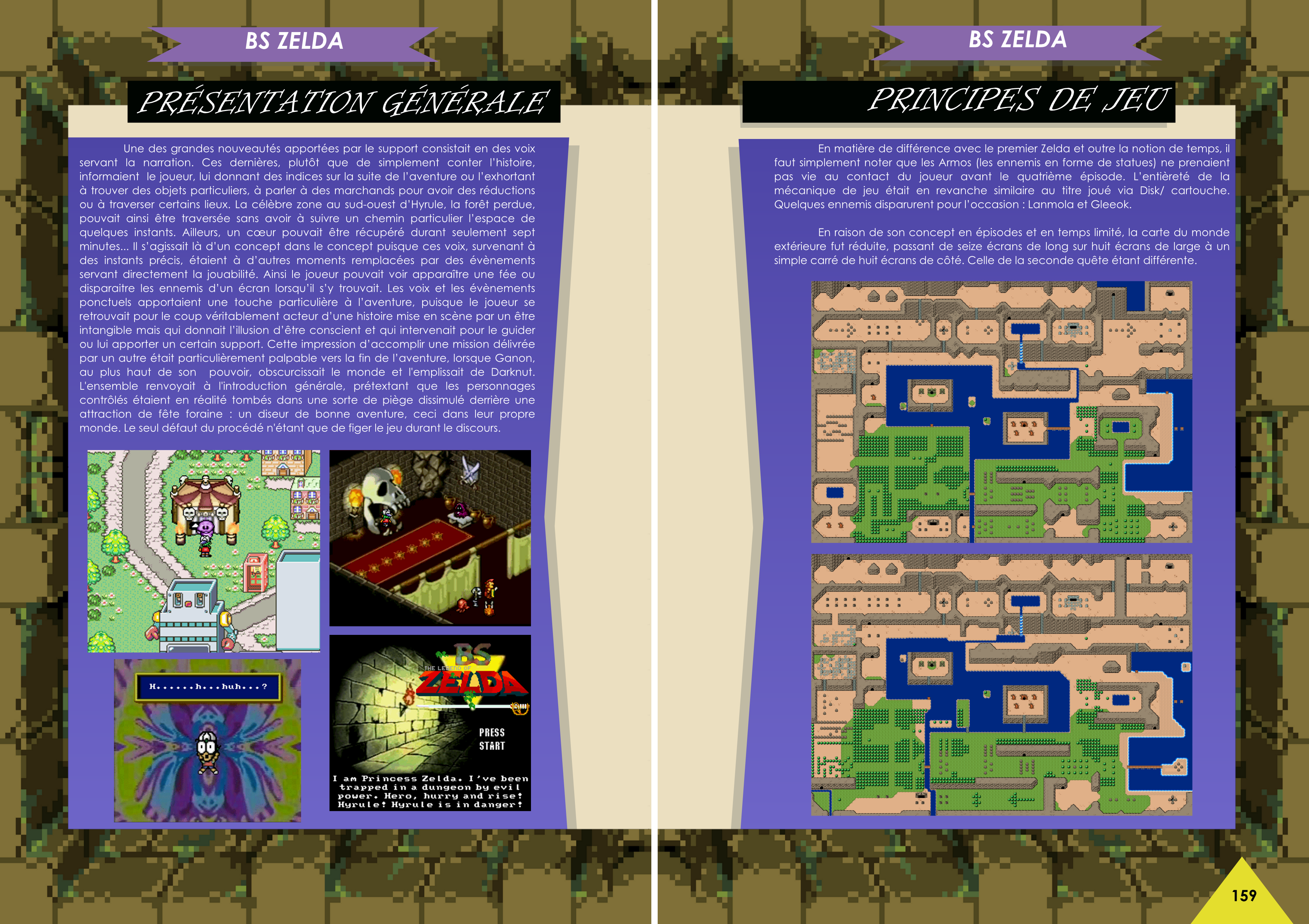 The animated series and the children's story

General presentation of the cartoon: 20 pages.The Princess Zelda cartoon is presented in detail. This section comes back on the general scenario of the work and its characters. It offers all the titles of all the episodes, in French and in English, as well as a complete summary of each of them. Inserts allow you to compare the facts, characters, objects, places and events of the game and the cartoon. 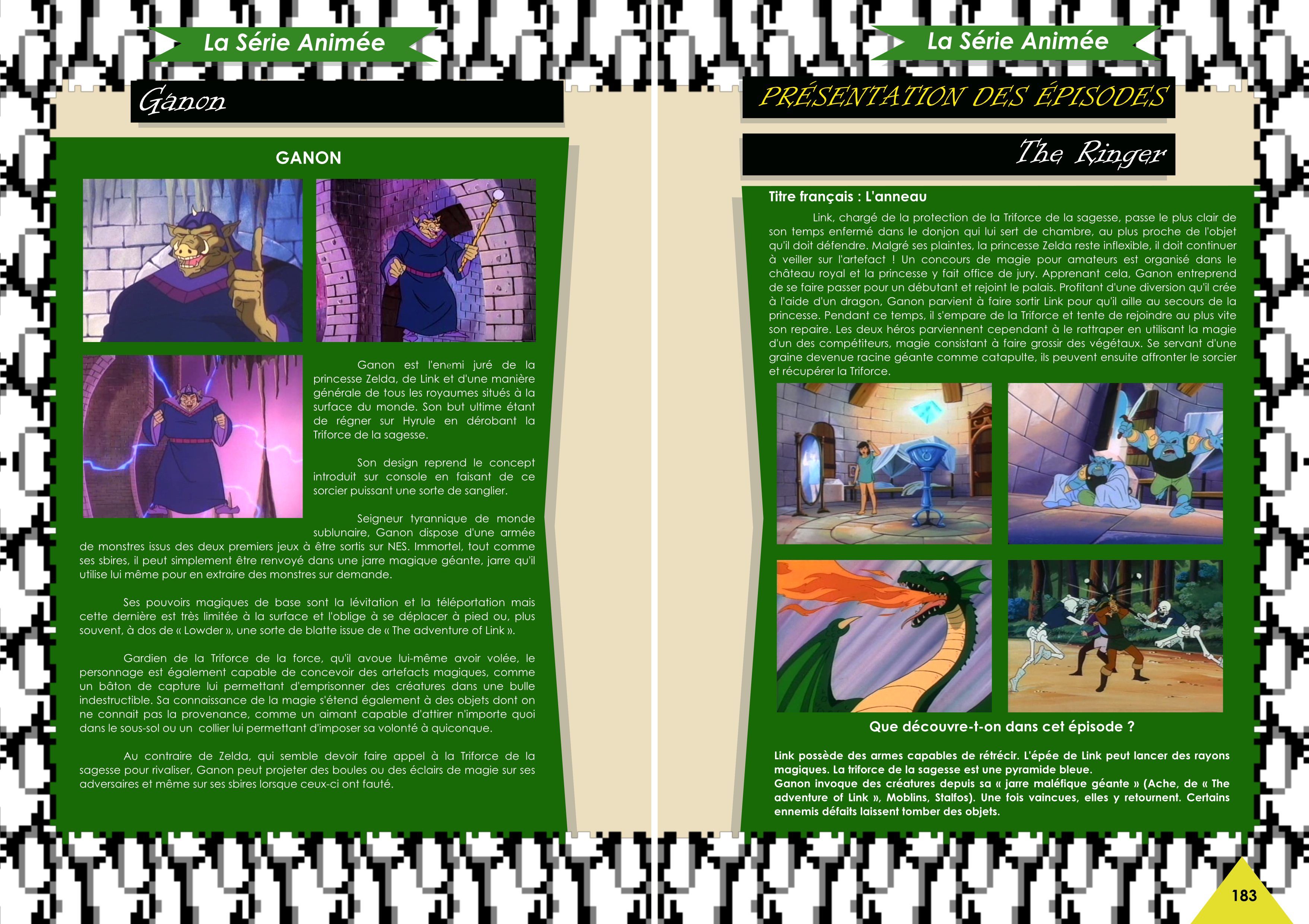 The book presents all the editions on tape or DVD of the animated series, for all the countries of diffusion. The music is not left out, since this section also presents all the editions on K7, Vinyl or CD of the soundtracks of the work, for all the countries of diffusion. As a bonus, the famous Italian version of the credits is even fully translated. 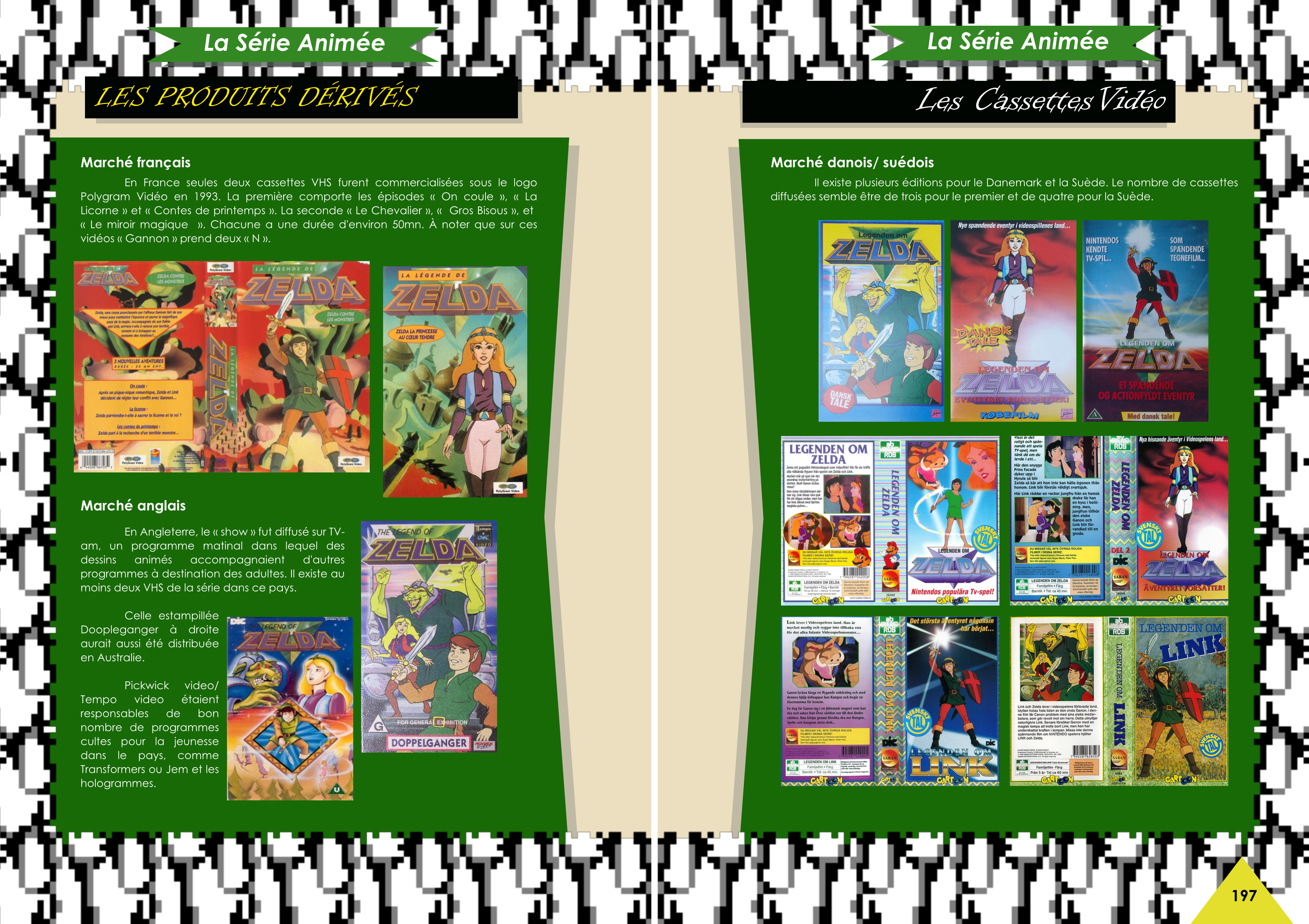 Presentation of the children's story: 4 pages.

This tale was published in the USA and in some European countries. The Fan Book presents in detail the scenario, the characters and the adaptations with the famous audio version on K7.

Presentation of The Legend Of Zelda merchandising: 107 pages.

Each item is detailed with its origin, its concept, its date of publication, its complete original title and possibly information related to the publications in the case of books or music CDs. 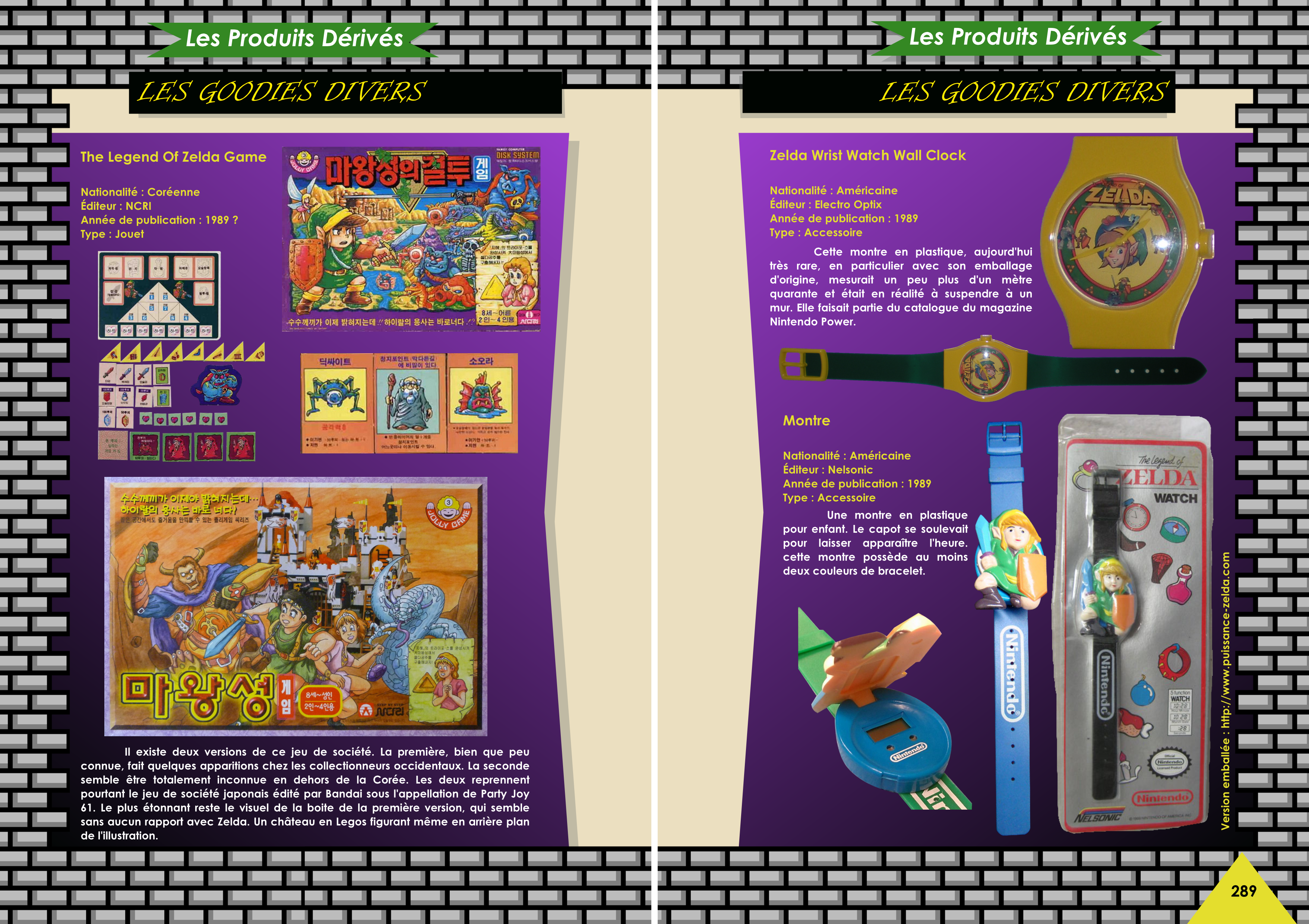