Côté Gamers is proud to propose for the first time in France, a NES game development contest! 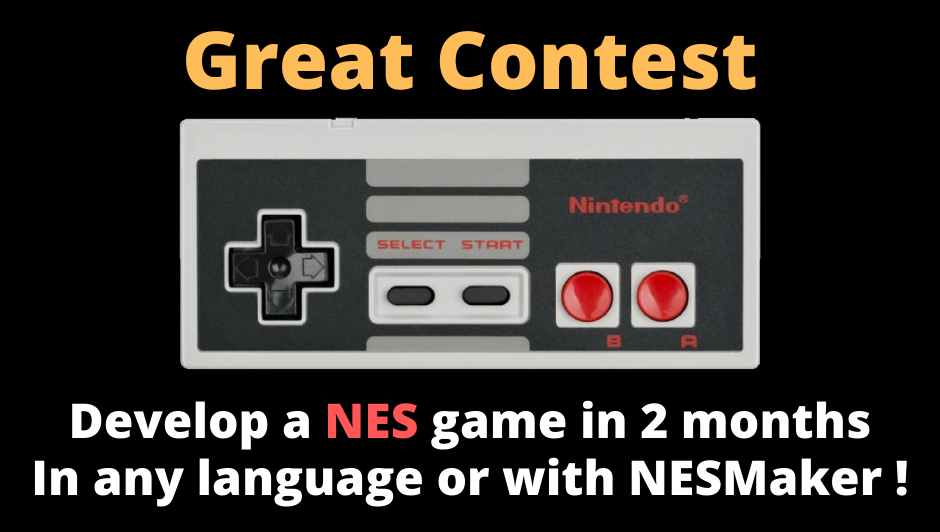 This contest is open to everyone: professionals, amateurs, independent developers or just curious.

The goal is very simple: you have 2 months to develop a game and send it to us. Our jury and the public will then vote to elect the best games. The first three will allow their creators to win gifts, glory and become immortal in the history of video games (on this aspect, Côté Gamers guarantees nothing!).

You can offer any kind of game: Shoot 'em up, puzzle game, RPG or pumpkin seed throwing simulation!

Your game doesn't have to be complete, but the more complete it is, the more reviews you will get and the more chances you will have to win!

The complete rules of participation are available at the bottom of the page.

In summary, to participate, you simply need to contact us and indicate your first and last name, as well as your pseudonym if you prefer to remain anonymous and your email address, so that we can contact you easily.

You will have to give us the title of your game and its genre, but you can do so when you send us your game. The title doesn't have to be definitive, it's mostly about allowing people to identify it.

At the time of submitting the game you will also need to provide us with an image of the title and in-game to visually identify your game on our contest page.

You can participate as a team or solo.

You can develop your game in via NESMaker, with ASM or any langage but your game has to run on an offical NES harware.

Once the entry deadline has been reached, we will post all submitted games online. The public will be able to vote for their favourite games and on our side each member of our Jury will designate its winners.

Once the entire jury has made its decision, we will count the votes of the public and announce the results.

All you have to do is create your game! 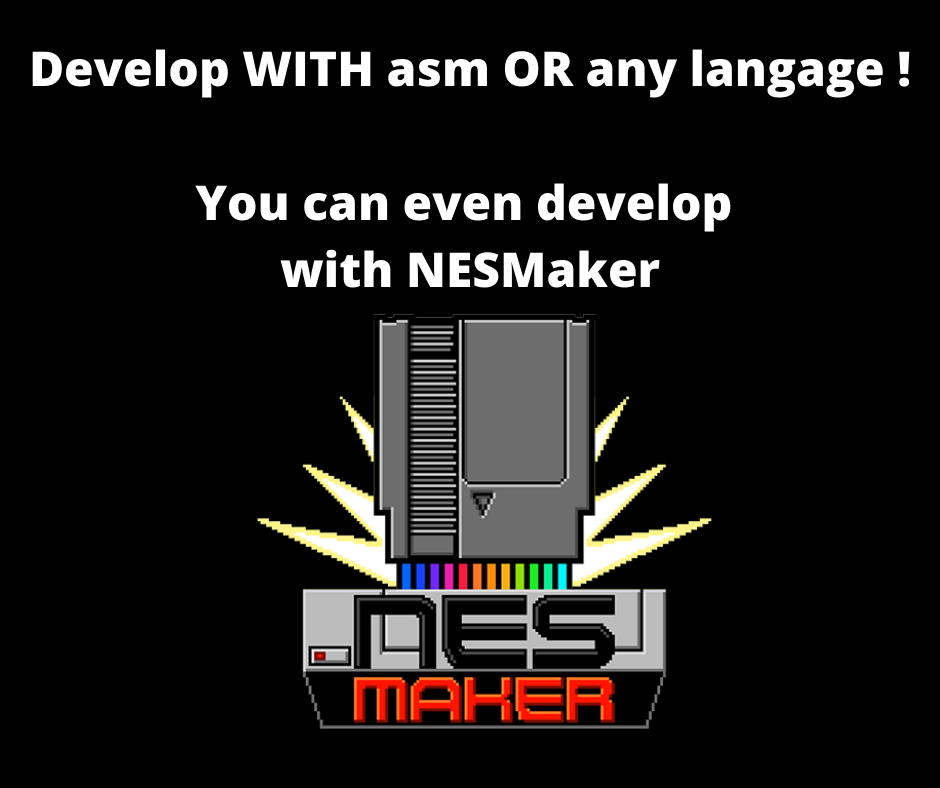 THE FAQ! THE FAQ!

-Is it necessary to integrate music, intro or non-gameplay elements?

You are the only decision-makers! If your game is superb in terms of gameplay and playability, you'll be able to do without it, but you'll increase your chances by creating something successful. The closer your game is to a full game, the more it will be appreciated.

-Can we offer a hack?

Clearly NO! Your game must be 100% original, both visually and musically, and, it goes without saying, from the point of view of its gameplay. Of course games can look alike, if you program a tennis game it will look like another tennis game, but copying Super Mario completely by changing the settings and characters won't be a good idea! Edit Super Mario to add levels to it too.

-Are you going to edit the game next?

-Are we making money?

For this first edition no, you will win "physical" gifts. We will see for other editions how to proceed depending on the feedback from participants and the public.

-Can we really offer you any kind of game?

No hacking, no plagiarism and of course no racist, homophobic, anti-religion etc. games. Very ordinary restrictions, but apart from that you can offer any game. If your game contains scenes that are inappropriate for minors, you will need to tell us so that we can warn the public and take appropriate action.

1-The competition is open to any person residing in France or abroad.

2-The developed games can use NESMaker or be entirely coded in the traditional way. All programming languages are accepted as long as they work with a real NES, without modification.

5-Participants may submit more than one game.

6-The games can be developed in team or solo.

7-All games must be original. The modification of existing games or the presentation of existing games, whether commercial or non-commercial, amateur or professional/independent games, is not permitted. Games already exhibited (on social networks, video or photo hosting platforms, websites or Forums) before the start date of the competition are not eligible for participation.

8-Games do not have to be complete, but an IN-Game indication must indicate the end of the game.

9-Any person wishing to participate in the contest must contact Côté Gamers and indicate surname, first name, pseudonym to be used for the presentation of the game (optional), e-mail address, title of the game (even provisional) and genre of the game. This information can be filled in when the game is transmitted to Côté Gamers.

10-During the transmission of the game to Côté Gamers, participants must provide a capture of its title screen and an in-game capture.

1-The games must not present any offensive or illegal character.

2-The content and genre of the games presented are free.
Nominations of the winners

1-The winners are determined by the number of votes obtained during the voting. The game with the most votes wins.

2-The votes are made by the public and by a jury whose members are quoted by Côté Gamers.

4-The games will be appreciated according to their originality, production, gameplay, playability, design, soundtrack and length.

The following prizes are in French only, but we'll also offer physical rewards that everyone can enjoy

Our sponsors will offer additional prizes to our winners, follow our online announcements!

1- By declaring their participation, participants automatically and unreservedly accept these rules.


2-Every participant accepts that his game be made public so that the public can try it and elect the game of his choice.


3-Every participant accepts that his game be shown publicly, by written voice, video and photos, on the Internet, in forums, on social networks or in books and/or magazines. The public exhibition includes graphics, gameplay and soundtrack.


4-The submission of a game to the contest does not imply any obligation for Côté Gamers to officially publish the game in any form whatsoever.


5-The presentation of a game to the contest, does not in any way oblige its author(s) to publish the game at Côté Gamers or to finish/improve their game after the contest.


6-Côté Gamers reserves the right to contact the participants to offer them a physical edition of their game. The terms of the contract linked to a possible publication are in no way linked to the competition.